Sakamoto portrayed the clouds above a canal along the Chikugo River on the outskirts of Kurume soon after his return from France.
The sky occupies the majority of the picture and the clouds especially play the leading role in this image.
Sakamoto painted another work of more or less identical composition three years later, in 1927, which is in the collection of the National Museum of Modern Art, Kyoto.
Compared to the work dating from 1927, the unrefined portrayal of the mountains and clouds is actually quite charming. 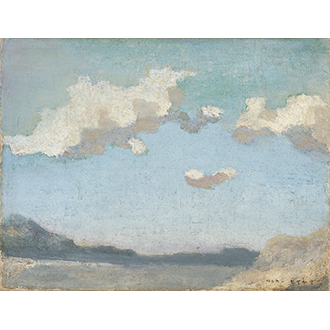 Candles were a subject that Takashima Yajuro continued painting from early on in his career to his final years. He never exhibited them at individual shows and is said to have given them directly to close friends.
Dozens of pictures of candles remain, most of which depict a candle placed directly on the table with no signature. This painting is extremely rare as the candle is placed on a dish and it bears a signature. 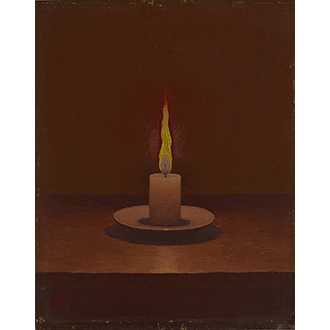 This work demonstrates a high degree of perfection among the still lifes dating from the 1950s, which depict flowers and vases.
The vase appears to be blue-and-white porcelain of the Yi Dynasty. While the three-dimensional treatment employing a certain amount of shading presents texture and volume, the mimosa and other flowers spread over the entire picture in gorgeous colors and the splendid pattern on the mat on which it is placed are stylized rather flatly,
demonstrating the characteristics of Kojima’s still lifes. 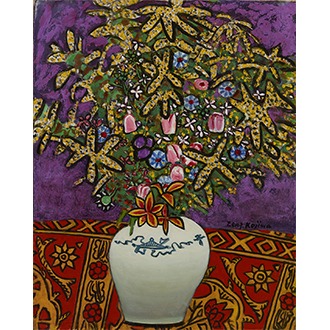