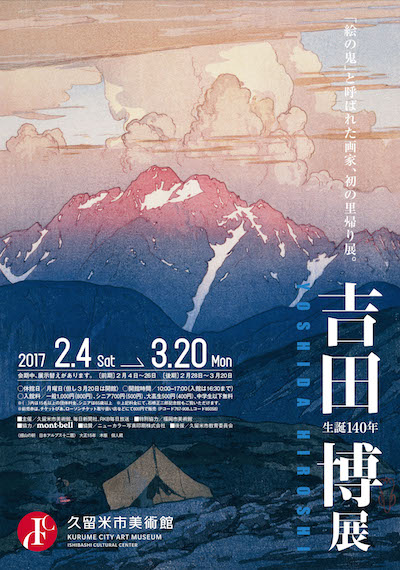 Throughout his life, Yoshida Hiroshi (1876-1950) went walking devotedly across fields and mountains in search of the nature he wanted to depict. He practiced painting so persistently that his friends called him “a demon for painting.” His attitude as a painter constantly reflected a challenging spirit that refused to accept any compromise and a sincere eye for art.
This exhibition commemorating the 140th anniversary of Yoshida Hiroshi’s birth presents a full view of the artist’s career through approximately 230 works including the most representative examples. His watercolors of Japanese landscapes portray the humid climate with a fresh sensibility. There are also oil paintings capturing the beauty of majestic lofty peaks and fresh woodblock prints combining traditional techniques and Western-style expressions. This is the first time for a major retrospective of Yoshida’s works to be held in his hometown Kurume.